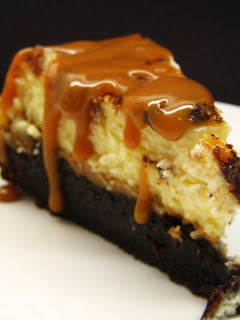 I am a proud member of UCSD's Hawai'i Club and this club just so happens to have a lot of pot lucks. We had a potluck this past saturday and i decided to bring this cheesecake because it is one of the easiest yet most 'impressive' cheesecakes i have ever made. Sure, it's delicious brownie carmel-y cheesecake-y goodness but compared to white chocolate raspberry cheesecakes or dulce de leche cheesecakes (my personal favorite) it just doesn't seem as elaborate to make as it looks. It's a store bought brownie mix at the bottom, caramel, and then cheesecake drizzled with more caramel. It's a fantastic cheesecake to make if you don't want to go through all the trouble with crushing graham crackers and pressing them into the pan to make a crust- although i know that sometimes people's favorite part about cheesecakes and pies are the crust. This cheesecake can easily be dressed up even more by making home-made brownies with different flavors or mix ins, using special store bought brownie mix, or tweaking the cheesecake layer flavor. I used the larger family size 180z. package of brownie mix because i wanted a thicker brownie crust, if you use the 18 oz package prebake it for about 20 minutes instead of 7-10.

1. Preheat oven to 350 degrees F (175 degrees C). Grease the bottom of a 9 inch springform pan. and line the bottom and edges with foil
2. In a small bowl, make the brownie mix according to directions on package. Pour into pan and bake for about 7-10 minutes until just set.
3. Melt the caramels with the evaporated milk over low heat in a heavy saucepan. Stir often, and heat until mixture has a smooth consistency. Reserve 1/3 cup of this caramel mixture, and pour the remainder over the warm, baked brownie crust.
4. In a large bowl, beat the cream cheese, sugar and vanilla with an electric mixer until smooth. Add eggs one at a time, beating well after each addition. Pour cream cheese mixture over caramel mixture. Place cheesecake in a waterbath and put it into the oven.
5. Bake cheesecake for 50-60 minutes, or until just set. Turn off oven and leave cheesecake inside until oven has cooled. Take cheesecake out and refridgerate. When cake is thoroughly chilled, loosen by running a knife around the edge, and then remove the rim of the pan. Heat reserved caramel mixture, and spoon over cheesecake.